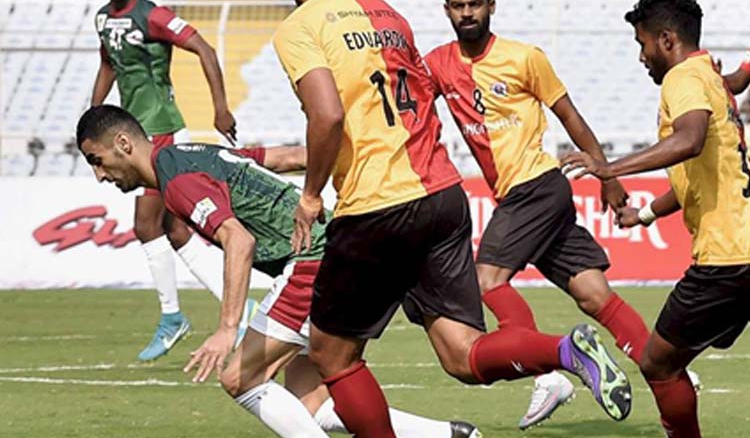 A Goalless Derby in Salt Lake

On Sunday, the enthusiasm of Bengali football lovers peaked with yet another energetic showdown between the all-time rivals Mohun Bagan and East Bengal. The match, held at Salt Lake Stadium grounds, Kolkata, had a frustrating end to an awaited derby match, which resulted in a goalless draw.

After a relentless effort, the defending champions, Mohun Bagan, were brilliantly defended by their arch-rivals. Mohun Bagan started with Joseba Beitia leading the side with an impressive 4-4-1-1 formation, and soon secured themselves chance to score as early as in the 15th minute, Beitia shot the ball to far post, failing to score a lead. The rest of the first half, both team’s attacks failed to materialize a single goal.

However, in the second half, East Bengal returned with much more attacking strategies, but it was hard penetrating through the Mohun Bagan’s defense and take a certain lead. In the 43rd minute, Suhair broke through the East Bengal defense and attempted a ground shot, but Lalthuammawia Ralte, defended well at the goal post. Mohun Bagan produced some chances in the 50th and the 59th minute, but was unable to execute the entire plan.

After a relentless try by both the rivals, the Kolkata derby concluded with a goalless draw. East Bengal defense looked a bit unorganized in the 1st half, but Mohun Bagan failed to utilize their chances, often missing a couple of sitters, as the match ends with frustrations for both side.