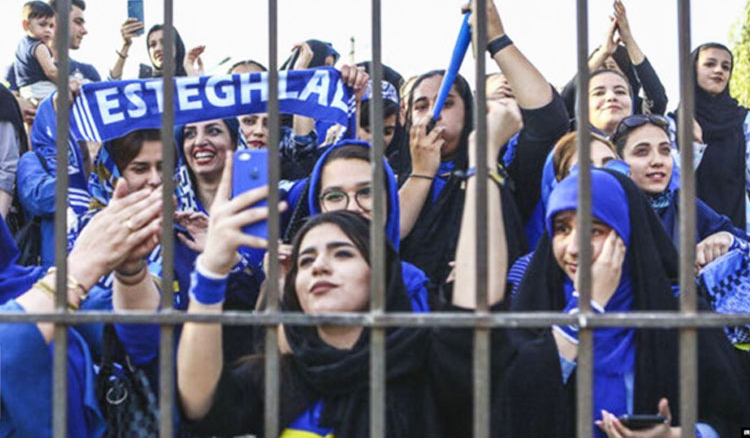 Its saddening to hear that even in 21st century women have to still fight their way for certain things and rights that are very common factors of living or entertaining oneself. Women have been fighting an ages old fight against, discrimination, hypocrisy, patriarchy and many more. If in a place women have to take permission to a male member of the family to be at some place and let them know about her whereabouts, some even have banned women from watching a harmless live match on a field.

Iran is one of the countries still boasting a ban, asking women to stay off of the field from watching a men’s football match. The ban goes on to a violent extent where, women who were found to enter a stadium despite such restrictions imposed, are to send for trials over their jail terms, after the 1979 Islamic revolution. Over the years, many protests have been laid out by not only women of the nations but from humans all over the world along with certain organizations.

However, the law could not keep the women trapped inside their homes, as they chose a different alternative often, dressing up as men to enter the stadiums for enjoying the thrill and enthusiasm of football. The outcry for change sounded suddenly more vivid, when an Iranian girl, also goes by her social media name ‘Blue Girl’ set herself on fire outside a court after learning she may have to serve a six-month sentence for trying to enter a football stadium causing her death.

Sahar Khodayari, was a 30-year-old Iranian girl, belonging from Tehran, a fan of Iranian Football team, Esteghlal, from where she derived her social media name ‘Blue Girl’ as a significance to their jersey. She apparently, rebelling against the law on women entering stadiums, went to watch a match dressed up as a man and did get caught by the police. On Monday, the court sentenced her 6 months of jail for entering the stadium, and protesting to the incident she set herself on fire outside the court, just after the court hearing.

FC Barcelona is very sorry to hear about the death of Sahar Khodayari, may she rest in peace. Football is a game for everyone - men AND women, and everyone should be able to enjoy the beautiful game together in stadiums. https://t.co/icR4jIIa68

This sparked an outrage not only in Iran but outside the country as well. The sports world was deeply saddened after the incident, and condemned Iranian law that bars women from a harmless and simple demand of entering a stadium to witness a men’s game. Iranian Captain Masoud Shojaei stated after their FIFA Qualification win against Hong Kong, ‘We scored two goals and won the game on the field. But we lost because Sahar is no longer, Shame on me for not having been able to do anything and shame on those who took away the most obvious right from Sahar and all Sahars.’