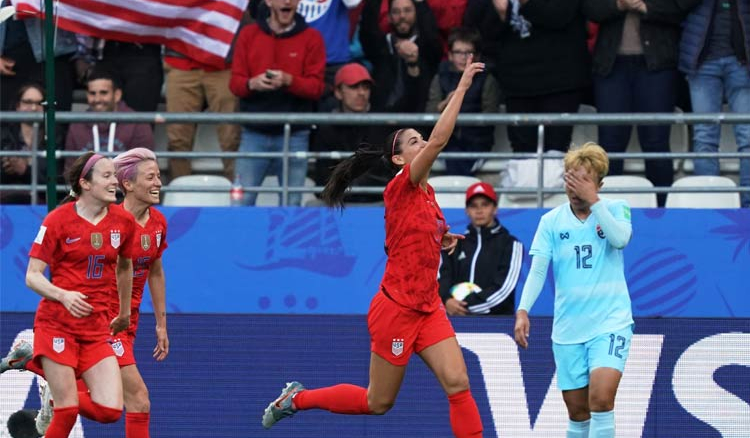 Three times World Champion United States have been one of the team’s that spectators were looking forward to watch playing because of their prevailing records. In this year’s World Cup, the defending Champions were scheduled to start their contest against Thailand on 12th June and they had the splendid start they could have dreamt of. USA came out all guns, and scored a stunning number of 13 goals while Thailand looked unsure of how to stop the gaols let alone score some.

Alex Morgan of the United States attempted for a goal as early as in the 6th minute, but the goal was ruled out for Morgan striking the ball being offside. However, the goal hungry USA didn’t have to wait much, as Morgan once more attempted on a goal at the 12th minute, registering just the first goal for the night. USA went on a rampage after that, as in the 20th minute Rose Lavelle and in the 32nd minute Lindsey Horan, both started raising the stakes.

USA secured an easy lead in the first half of the game, but their hunger for scoring more goals took their lead several steps higher in the second half. Morgan herself, scored 4 more goals and among the rest, Sam Mewis 2 on 50th and 54th minute, Rose Lavelle 1 more at 56th minute, Megan Ropinoe at 79th minute, Mallory Pugh at 84th minute respectively, then Carli Lloyd took it to the end moment to score the last goal at the extra 2 mins after the final whistle to add 13 goals, crushing Thailand in a spectacular game. The last record of highest goal by a team in a match was held by Germany for 11 goals against Argentina which USA topped by 2 more goals. Alex Morgan, the star of the night, scored individual 5 goals, despite the one ruled out early in the game, levelled her 5-goals haul with fellow countrymen Michelle Akers as the highest goals scored by a single player in a World Cup match.