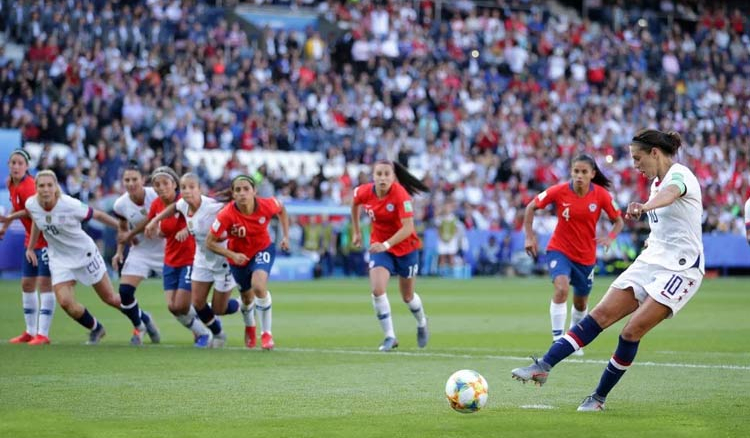 United States kick started their FIFA World Cup campaign with an astonishing 13 goal win against Thailand and showing their dominance on the field. The same dominance was noticeable in the second game as well, against Chile on 16th June, Sunday. United States have been the world champions for 3 times and on 2011 they managed to reach the finals but lost to a more advanced Japan but regained their status in the next World Cup in 2015.

At the beginning of the game Chile goalkeeper, Christiane Endler punched the ball in the initial cross which reached Carli Lloyd, who sprinted along with the ball to score an early goal but her efforts took the ball to the cross bar only. Within 2 minutes, she attempts to squeeze the ball past Endler from a close range but Endler makes a drastic save. With repeated attempts, Carli Lloyd manages to punch the ball for the first goal of the night in the 11th minute as she hit’s a loose ball in the box to the top-right corner over a baffled Endler. In the 22nd minute Chile defender Carla Guerrero manages to get the ball in the box but was ruled out as offside. US doubled their lead in 26th minute when midfielder Julie Ertz powerfully headed the ball past Endler from another corner pass from Davidson’s pass. Carli Lloyd came back into the spotlight with her 2nd goal of the night with yet another corner kick by Davidson and Lloyd sprinted past all the defenders and guided her header into the bottom left corner of the goal as United States embraced their 3rd goal.

Chile needed to diminish the lead set by United States as well as stop any attacks by the team, but they were finding it hard to get past the United States defence. However, United States were still dominating the field with their repeated attempts to score a goal, and Endler brilliantly saved another incoming goal from Christen Press in the 56th minute. United States kept attacking the goal past Chile defence in the last few minutes of the game, while Christiane Endler kept restricting them from added damage as United States became victorious in their 2nd game in FIFA World Cup 2019.