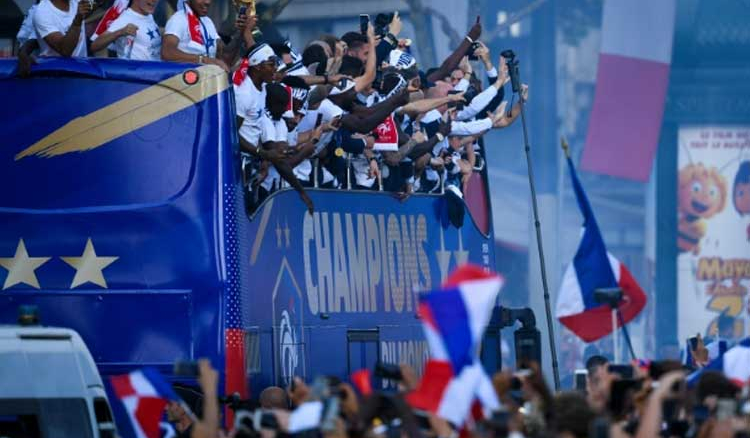 On Sunday, France achieved what the nation had been hoping for since 1998. It was a competitive path for them to the finals- against strong teams like Argentina, Croatia and Uruguay. The victorious team received a raucous and well-deserved welcome from the joyous French fans on their return to the Champs-Elysees.

French president, Emmanuel Macron announced that the players and their coach would receive the country’s highest honour- the Legion d’Honneur. He thanked the footballers for “having made them proud”.  The first ones who were spotted exiting the plane were captain Lloris and coach, Deschamps, raising the golden trophy in front of the delighted crowd. Nine jets from the Patrouille de France, the French air force’s aerobatic unit, flew overhead, trailing smoke in the French colours of red, white and blue in the honour of the French team. Fans were celebrating the victory across France overnight though reports of violence were also received from Paris, Lyon and Rouen among many other places. The Paris transport company, RATP renamed some stations in honour of the team captain, Victor Hugo Lloris and coach, Deschamps.

The team later received an official reception from the President, which was attended by 3000 people including 1000 youths from football clubs around the country such as Bondy, where M’Bappe had started his career.