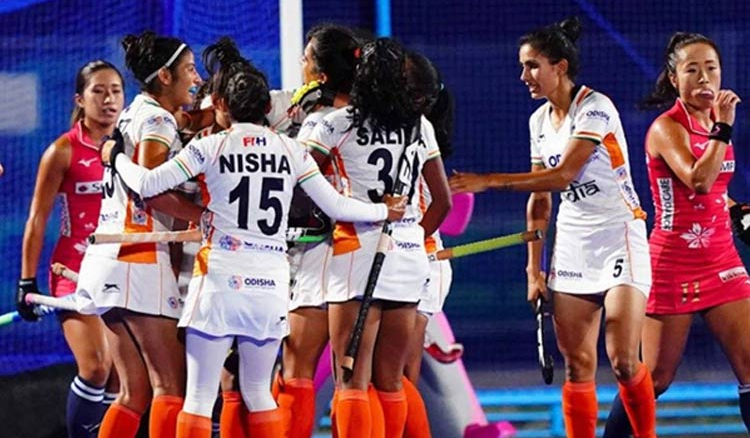 The Olympic test events saw a prominent defense from the Indian Women’s Hockey team, who played a clinical and cautious game to win over Japan. In a tactical game, Navjot Kaur and Lalremsiami were the star of the night scoring twice throughout the playing time despite the attacks from Japan the team’s defense stood like wall which Japan found hard to penetrate through.

For first 10 minutes of the game Indian women dominated the field, and in the 11th minute, Navjot Kaur made the first breakthrough for India, with a splendid goal from the front. However, the lead was neutralized in the very next minute, as a well-coordinated Japan, stroke back with Minami Shimizu giving the hosts a ray of hope.

With 1 goal each, both team reduced to defending strategies without taking much risk to enhance their lead further. Both the team waiting for the perfect chance to attack, India produced a few opportunities for themselves, with Navjot again leading from front, but in the end, the goal was not finalized. Japan too following a similar strategy earned some opportunities and again Shimizu got too close to doubling their lead but in the end, India defended well under pressure.

After the half-time India won themselves a penalty corner in the 33rd minute, drag-flicker Gurjit Kaur was up for the shot, but Japnese goalkeeper Megumi Kageyama defense was even better, but unfortunately for Japan, the rebound fell in the reach of young forward Lalremsiami who put the ball back in the net in no time and without any mistake to double India’s lead.

In the 42nd minute Japan produced back-to-back penalty corners, but breaking through Indian defense and neutralizing the score once more was not possible. India also had their share of penalty corner in the 45th minute, but was not able to extend it. Both the goalkeepers were very apt in the last few minutes of the game, and Indian keeper, Savita did pull out some stunts to save the day for India in many occasion to clinch the victory.